Gretchen Peters - The Night You Wrote That Song 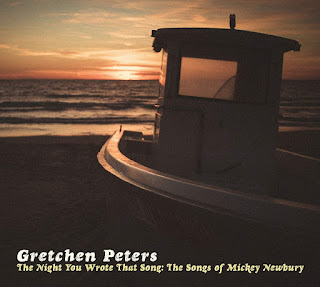 Review:
A bit of real class


This is an excellent album of great songs, excellently performed.

Mickey Newbury was a remarkable songwriter. He is perhaps not as well known as he might be but is held in the highest regard by other songwriters – including Gretchen Peters. Newbury’s songs songs were most often of emotional damage and difficulty, but they have an insight and humanity which to me makes them moving and involving rather than miserable. They have real musical weight and the lyrics are exceptional – on a par with Leonard Cohen or Joni Mitchell at times, which is about the highest praise I can offer.

Peters sings them wonderfully. She has the emotional depth and intensity to give them real meaning and obviously cares very much about what she is singing. The arrangements, the band and the production are all top-notch and every one of these shines like the gem it is. Several tracks here give me goose-bumps (including a phenomenal version of the extraordinary I Just Dropped In) and there’s not a weak track on the album.

In short, this is a bit of real class and warmly recommended.
Posted by Sid Nuncius at 06:51